Scarlet Gorge is the Grand Canyon of Telara. It’s the first shared zone for Defiants and Guardians, which could result in occasional skirmishes.

In Rift’s early days, Scarlet Gorge sported the first Ancient Wardstones, which would spawn a quest NPC for your faction if powered. These wardstones could be destroyed by the other faction. 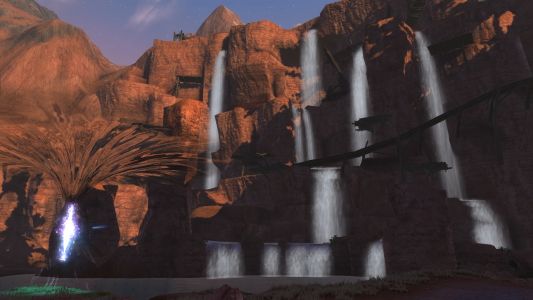 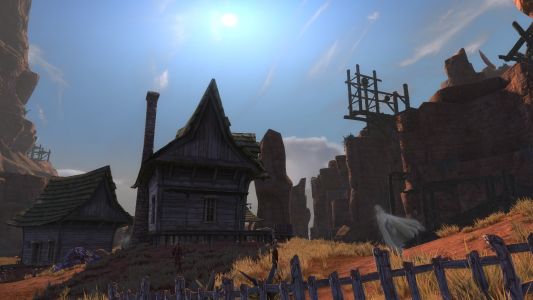 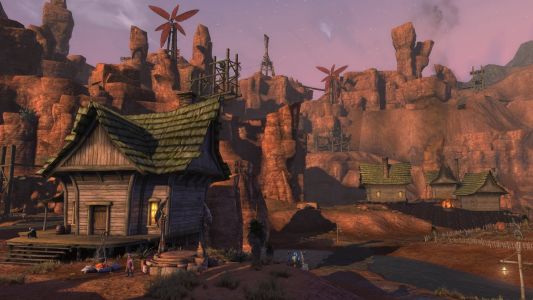 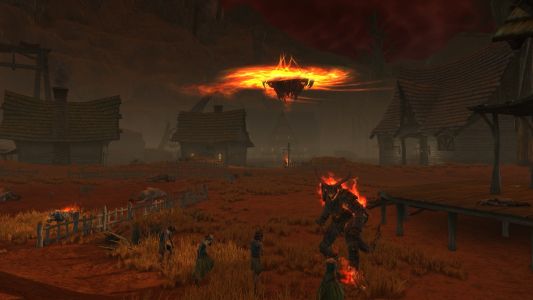 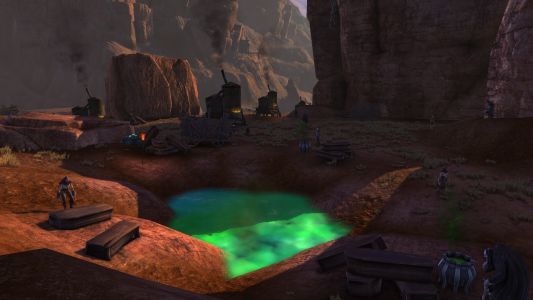 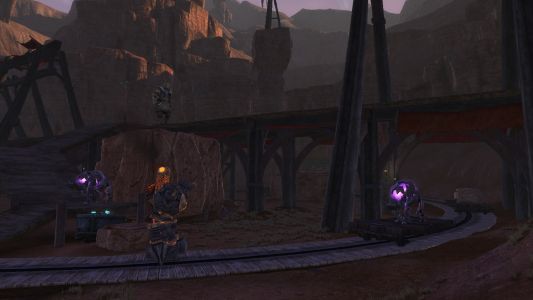 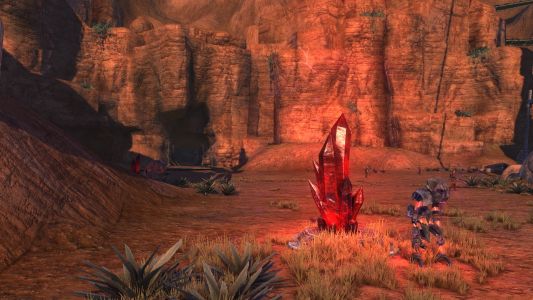 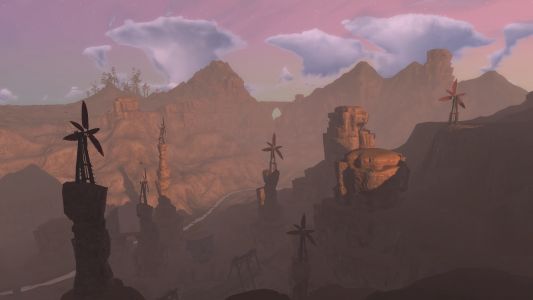 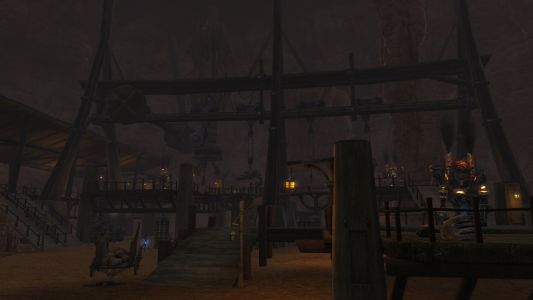 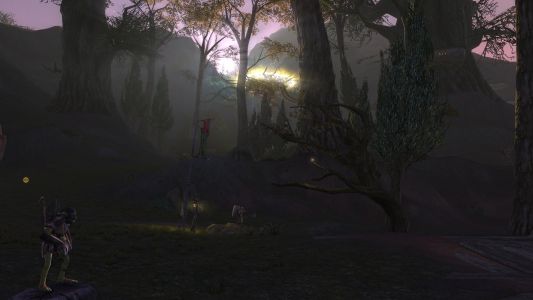 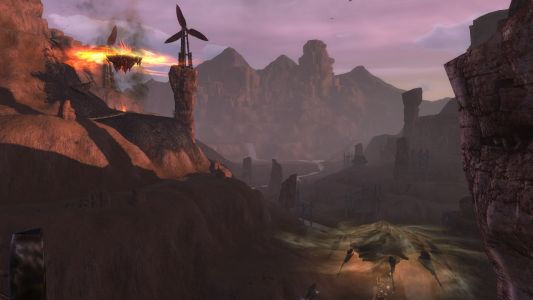 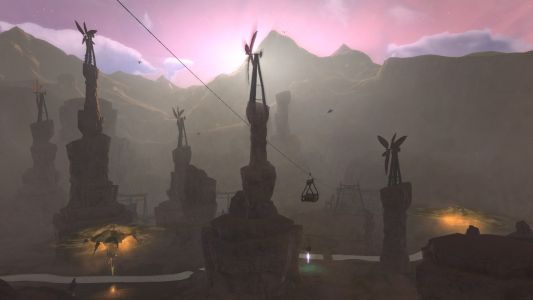 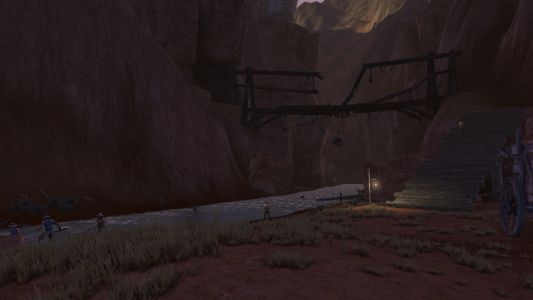 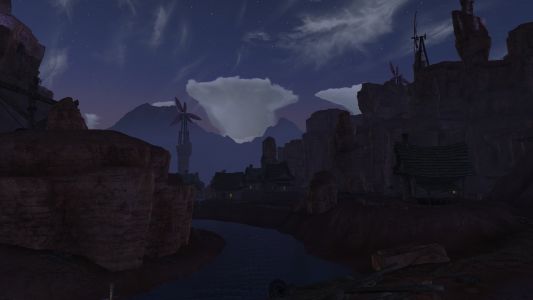 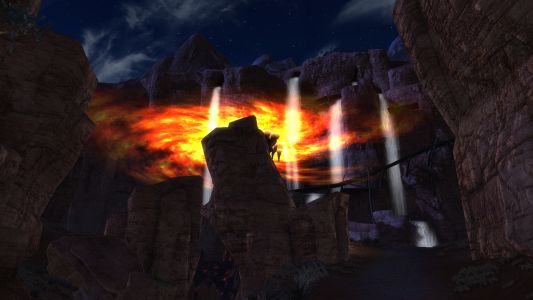 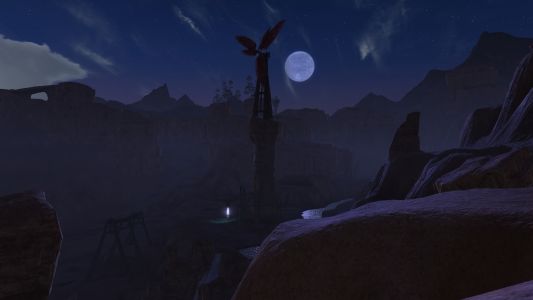 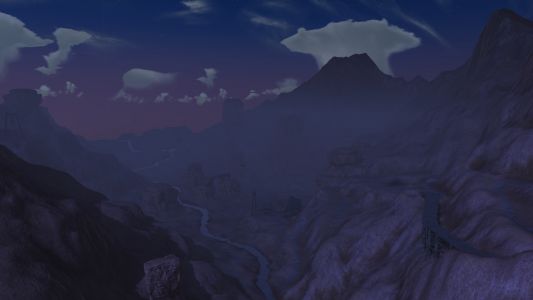 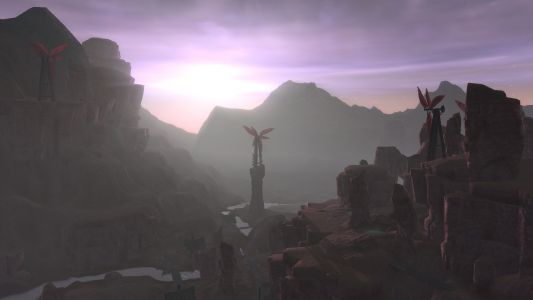 Guardians coming from Gloamwood and Defiant traveling through Stonefield arrive on opposite sides of Scarlet Gorge, staring each other down across a chasm blessed and cursed with newfound sourcestone.
The place was once beautiful and austere. Crystal skies soared over a box canyon strip-mined into the earth by industrious miners. So rich with ore is this chasm that it once glittered by night like a pit of stars. Anticipating the conflagration to come, Fire Rifts have erupted throughout the Gorge, smothering the precious metals under blankets of ash and turning the sky red as a gushing wound.
As the Defiant and Guardians race toward open conflict, the dragon cults called the Golden Maw and Endless Court encroach on Scarlet Gorge. Eager for sourcestone, all these factions rush headlong into a four-way massacre. Scarlet Gorge will serve as a cauldron, where blood is the broth, greed, ambition, and devotion the spice, all boiled by the heat of the Fire Rifts into a brew to sate Telara’s enemies.

Leaving the gloom of Gloamwood, many Guardians yearn for the open sky of Scarlet Gorge. Too soon after they step from under the trees, these heroes encounter ruined settlements, reeking corpses stacked like cordwood. Mercenaries patrol, sifting through the piles of dead, dispatching any innocents who cling to life despite the poison bloating their bellies and fouling their blood. Nearby, the walking dead labor on extensive scaffolds, their bones showing signs of the same poison. Surely, the Endless Court is behind this atrocity, enslaving the miners’ lifeless husks in their greed for sourcestone.
Souls in the MachineWhile the Guardians battle soulless corpses, the Defiant face sentient machines. Many of the miners have mysteriously disappeared from the southern part of Scarlet Gorge, replaced by golems in service to the Golden Maw: humanoids and giant beasts made of metal plates and held together by magic auras. These constructs display an uncanny intellect and knowledge of mining.
Defiant scouts have found Golden Maw factories at Frayworn Rock and Thunderworn Ridge. Prisoners are dragged in, but only automata walk out. Not to be outdone in barbarity by the slaves of Regulos, the Golden Maw must have found their own way to exploit the populace. Defiant who raid these factories must face the ugliest potential of their beloved magitech.

As both factions of Ascended deal with the onslaught of Earth and Death, one of Telara’s greatest Fire Rifts has erupted in the town square of Rock Ridge. This monstrous inferno roasts the heavens scarlet, giving the gorge its name. Devils from the rift dominate and patrol Rock Ridge. The town council seems perfectly at peace with their new overlords, though the fiends haul common villagers away to unspeakable torment. Could the elders have willingly sold their village to Maelforge for protection from the forces of Laethys and Regulos
Guardians rush south and meet the northward march of the Defiant as both factions seek to liberate (or eradicate) Rock Ridge, seal the polluting rift, and claim this vital territory. Soon, the chasm will echo with clashing steel and snapping bones as Telara’s heroes fight for its most precious resource, heedless of the misery it has brought the people of Scarlet Gorge. Warlike Ascended will revel in the conflict around Rock Ridge, not realizing that this bloodshed pleases the dragons of Earth, Fire, and Death.