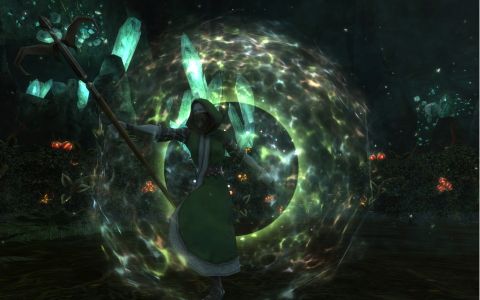 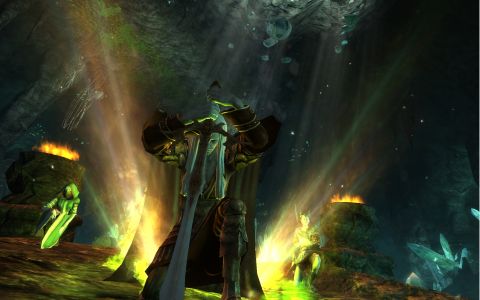 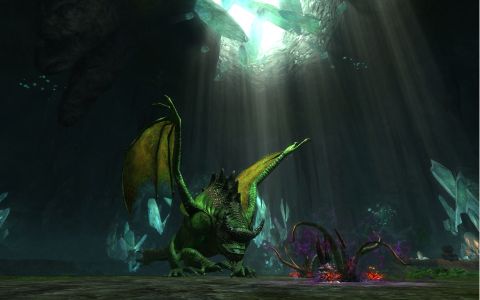 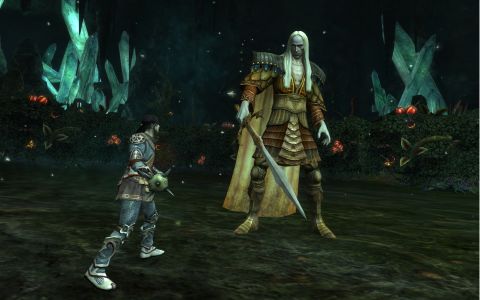 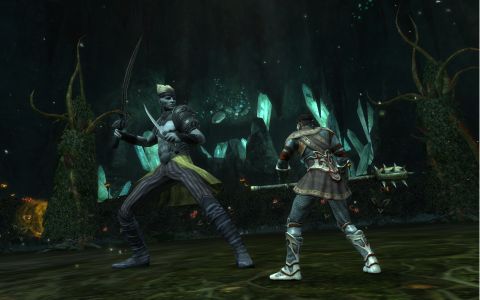 Of the Blood Storm, no dragon was more familiar to mortal races than Greenscale the Primeval, though this familiarity was a source of terror and sorrow. Greenscale would thunder across Telara, turning every forest into an aggressive, invasive force, seeding the world in vines and vegetation that could devour cities. Even Maelforge, for whom destruction was an ecstatic joy, did not cause widespread devastation on par with Greenscale’s crusade against all things civilized and soft.When Thorvin Sternhammer and his allies finally defeated and imprisoned Greenscale, countless wretches had perished between his teeth, beneath his claws, choked upon his poison breath.

Since then, Greenscale has remained imprisoned under Stillmoor, his indomitable will to devour suppressed by carefully-harnessed Death magic. Yet in the time of rifts, the dragon’s will tugs at his followers like a feral instinct, drawing them to his prison, to seek his release. At last, one of his minions has risen to the challenge, and if he is not stopped, this fallen hero of Telara will unleash Greenscale to crush the works of mortals once and for all.

The temple where Greenscale is imprisoned once had a name, which has been lost as the dragon’s waxing power has overgrown the walls with alien and awful plant life. Now it is merely called Greenscale’s Blight, and parties of Ascended will arrive to see the doors blasted away, the halls patrolled by the traitorous Elves of House Aelfwar. Fighting their way through these elite guards, heroes will find a vast antechamber, where Prince Hylas and his senior followers strive to dispel the magic that holds Greenscale in place.
Always resentful of the Ascended, Hylas is too arrogant to cross swords with Guardians or Defiant. Instead, his three lieutenants have prepared a trap for any interlopers. Details remain dim, but it is known that all three have studied the misdirecting Life magic of their Faerie allies, and each is a formidable challenge.
The haughty Duke Letareus is a warrior of unshakeable focus, able to slip into an unbreakable dance of twirling death. Enraged over the Mathosians’ harvesting of the sacred granitewood trees, Oracle Aleria hides her grief behind a mask and channels her fury into a unique command of the beast within every sentient being. Finally, Infiltrator Johlen is Hylas’s loyal spymaster, a Saboteur whose bombs and traps will drive even the most elite Ascended party to distraction.

Only if his vassals fall will Prince Hylas himself deign to engage any intruders, who may quickly come to wish they’d stayed home. Ascended who challenge the Prince of House Aelfwar will face the greatest Elven swordsman alive, his martial prowess bolstered with a surge of primal might granted by Greenscale. If Hylas falls it is both a triumph for Telara and a tragedy for the Elves, but the raid’s work is not yet done. For in the chamber beyond, Greenscale shakes off his shackles, a dragon more brutal and terrible than even the Ascended have challenged before.

To keep the knowledge from the dragon cults, Thorvin and his allies hid the secret of how Greenscale is held in check, though Death magic is certainly involved. If there is one benefit to Greenscale’s ancient rampage, it is that his general capabilities are well-known. The great green wyrm has astounding strength, and exhales poison so virulent, all the victim’s organs race to break down. The lethal plants of the Life Plane sprout where he wills, each of which sporting a unique and agonizing way to kill. Though in the Age of Dragons he preferred to stomp cities to the ground personally, Greenscale has no compunction against bombarding enemies from the air.
It is possible the Primeval is weak from his long imprisonment. Still, heroes who engage Greenscale must remember that this is no mere dragon. This is a trampling, roaring, embodiment of ruin, of the vines that swallow the tower, the unthinking, ever-hungry bane of nations.