Iron Pine Peak is the first frosty zone players run into, and one of the most magical if you love snow. Originally level 40-48, with areas suited only for level 50’s, the zone was later changed to a level 27-35 zone to introduce Crucia earlier in the storyline. 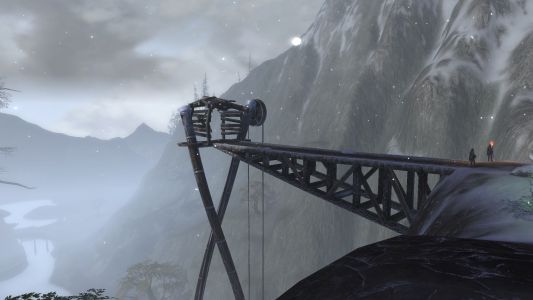 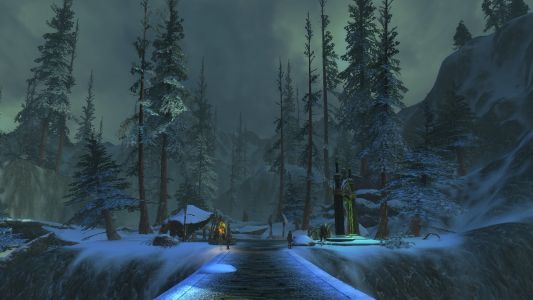 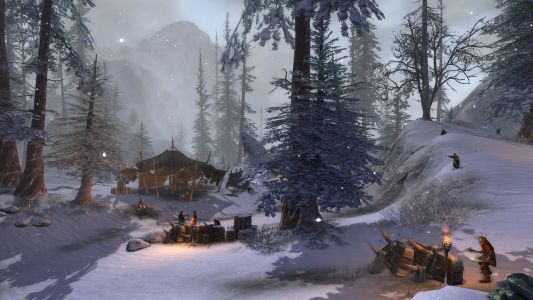 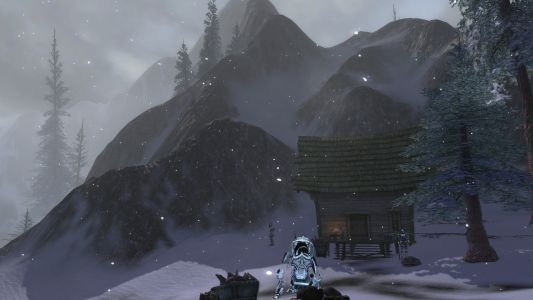 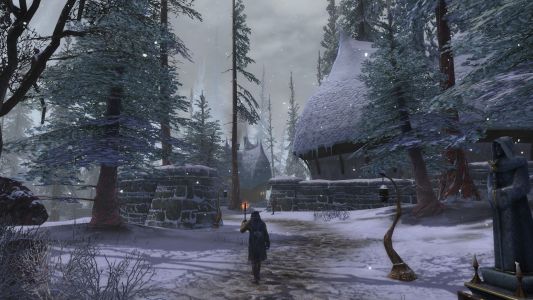 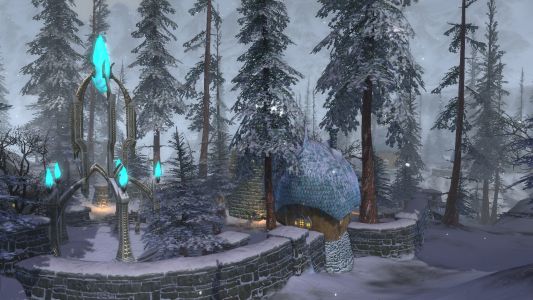 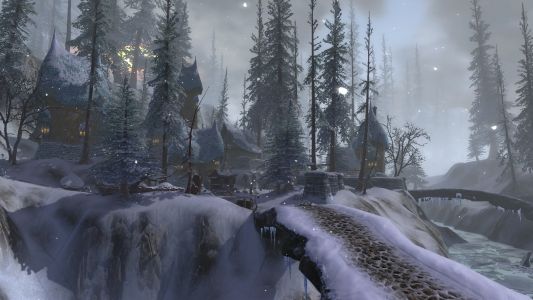 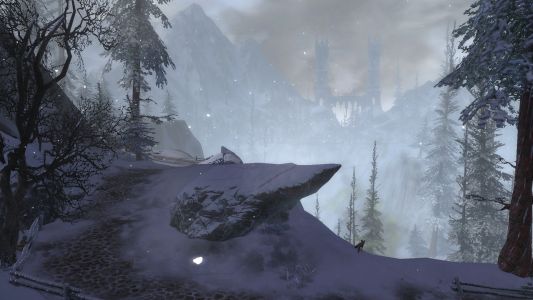 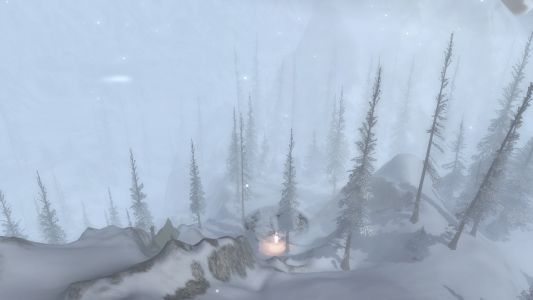 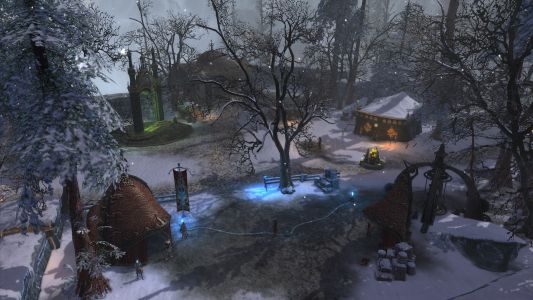 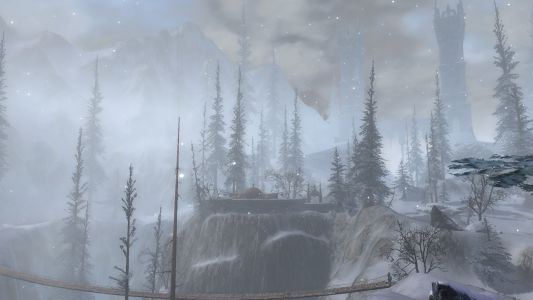 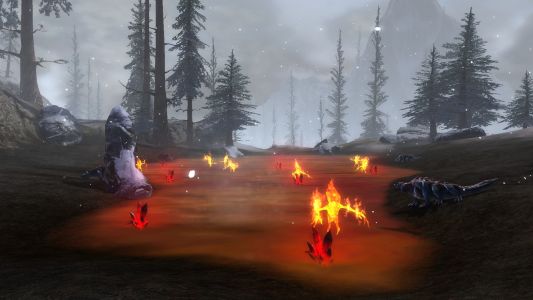 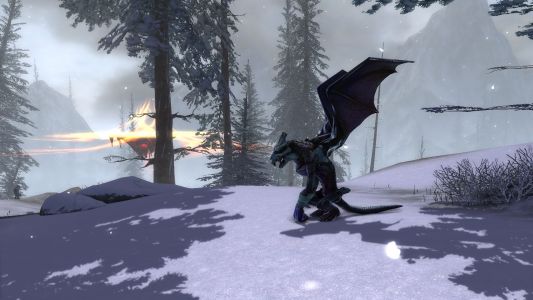 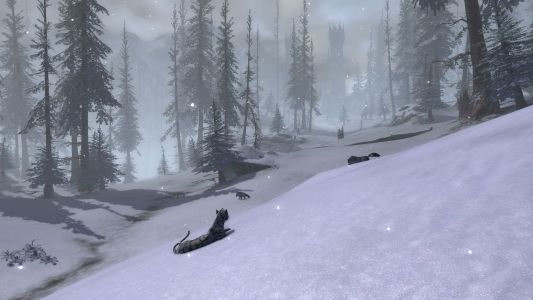 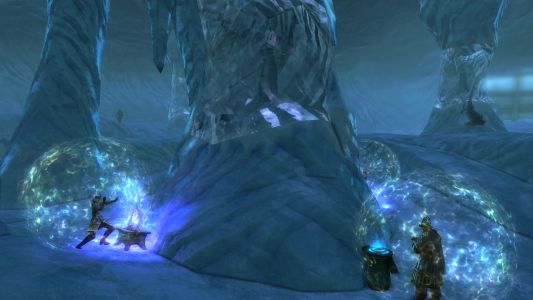 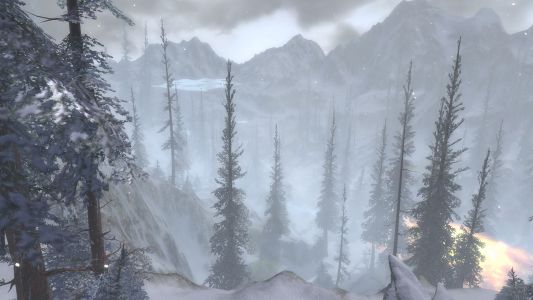 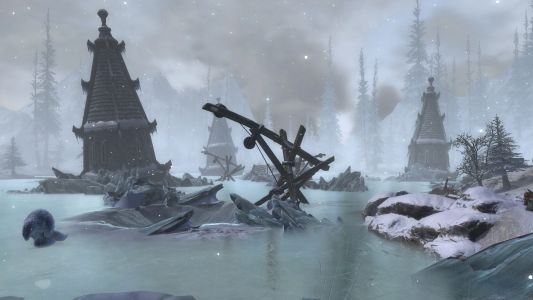 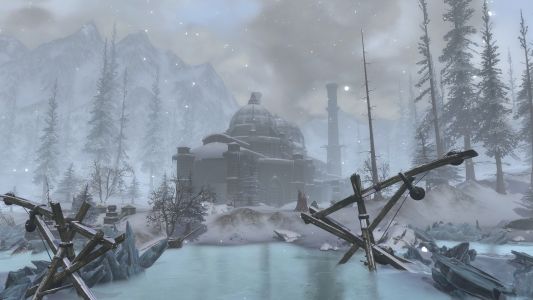 A snow-capped mountain range rises over Gloamwood and Stillmoor. It is always winter here, and the jagged crags are blanketed at all times by powdery snow, so white it can blind travelers on sunny days. The place looks austere and moody, but never desolate, as evergreens rise hundreds of feet above the snow, and their fortitude gives the mountains their name: Iron Pine Peak. Though Iron Pine Peak has always been home to snow and ice, something of its cruel, ageless magnificence is unnatural. Iron Pine never changes, beautiful and cold like an unmelting ice-sculpture. There is indeed magic behind the endless frost: Crucia, the Dragon of Air, lies entombed beneath the ice in her temple-city, and the sorcery that holds her has seeped cold into the very mountains, giving winter an eternal home in Iron Pine Peak.

Once, during the Age of Dragons, Crucia came to Iron Pine Peak, seeking a home close to the sky. She enslaved the people, mind and body, and had them build a city as magnificent and cruel as she. There, her thralls lived a mockery of life, moving in mindless unison to Crucia’s droning harmony. At last, the Warlord Börte led an army to defeat Crucia’s Storm Legion. Her allies, the mage Phynnious Rothmann and Ekkehard, Shaman of the Valnir, imprisoned the mighty dragon.

In a feat of sorcery unequaled since, the original Shaman and the first of the Pyromancers trapped Crucia in her city, then eternally banished every shred of heat from the valley where it lay. Now, that valley is filled with a nearly bottomless lake of ice, pierced only by the highest spires of that awful city, as if Crucia’s very claws surge desperately from her prison. A group of merchants has set up shop on this remarkable lake, gouging into the surface to make necklaces and ornaments from the unmelting ice. These baubles fetch a high price throughout Iron Pine, yet a few locals shun the merchants and their wares. After all, it is said that just gazing too deep into the ice can attract Crucia’s all-piercing eye, so why would anyone want to upset—or gods forbid, wear—her prison?

Since Telara’s defenders first subdued Crucia, the Icewatch has overseen her prison in Iron Pine Peak. Owing fealty to neither Defiant nor Guardian, this ancient order of wardens and protectors has been an incorruptible symbol of dedication, learning, and martial prowess to all Telara. Perhaps Iron Pine Peak’s greatest treasure is the base of Icewatch operations, the Chancel of Labors. This forbidding edifice serves as barracks, magical armory, and one of Telara’s greatest libraries all at once. Yet horrors from the rifts press heavily upon the Chancel’s defenses, wearing the mighty watchmen down as the sun melts vast glaciers.

From their headquarters, the Icewatch ranges throughout Iron Pine Peak. Of late, their patrols have run into surprising resistance from bandits, raiders, and other scum hiding in snowbanks and the caves winding under the mountains. The scoundrels have launched an all-out attack on Whitefall Lift, the twisting elevator that moves travelers between Iron Pine and Gloamwood. The lift’s Icewatch defenders hold the bandits back, but none can tell why they seek so desperately to control an exit from Iron Pine. With all this fighting wearing Icewatch veterans to the bone, and new recruits harder and harder to come by, people in the nearby town of Whitefall fear for Iron Pine. If even the resolve of the Icewatch can fail, the eternal frost itself may melt, unleashing Crucia to once more enslave the people of Iron Pine Peak.