In this dungeon, the Ascended are to stop the Ritual of Asklepian. This is indeed but one of the many threats carried by the Comet of Ankhet. Shoud Queen Una prevail, the universe will face the embodiment of the great Green Mother, cruel and harsh as nature itself can be, but under Queen Una’s control, devoid of any softness, mercy and nurture common to the true spirit of nature.
Studies have revealed just a little of this Coven’s protectors. The Tuath’de themselves are fierce adversaries – their allies are worse. 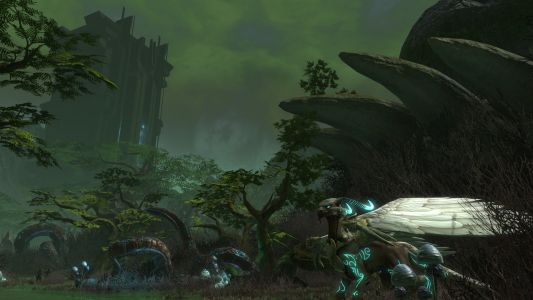 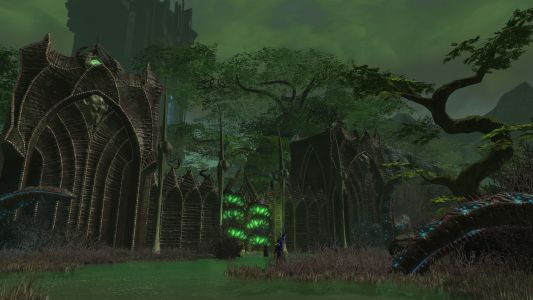 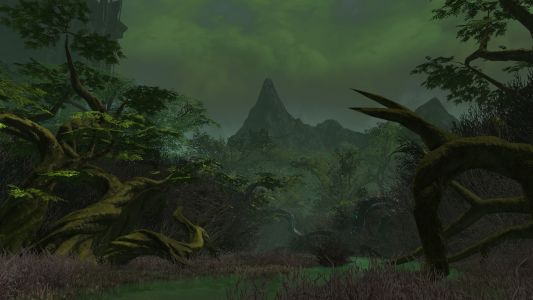 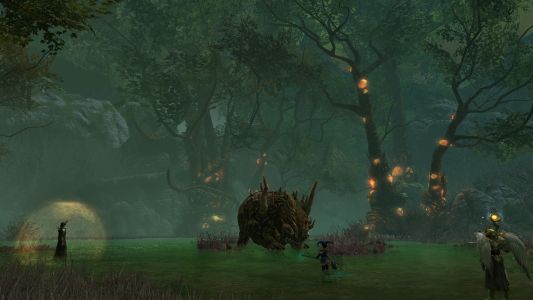 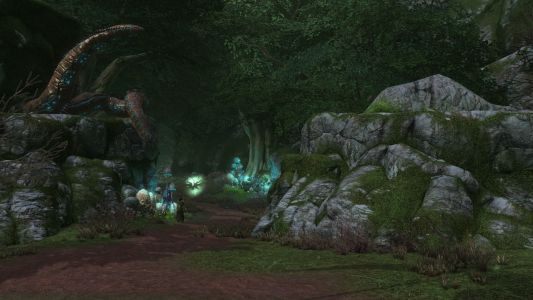 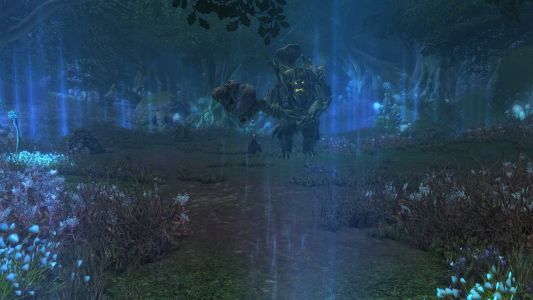 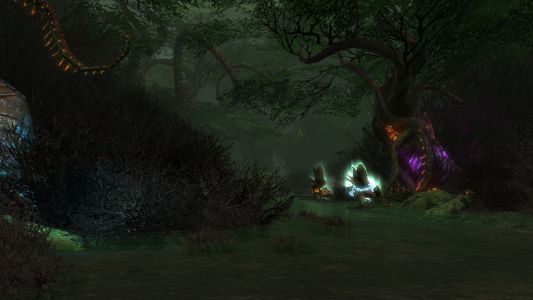 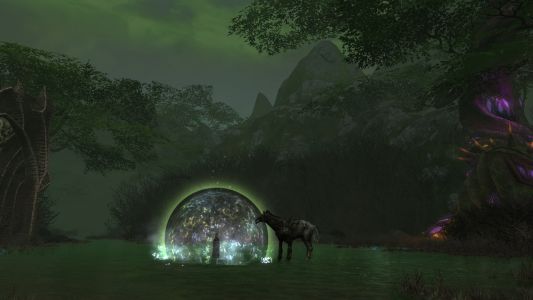 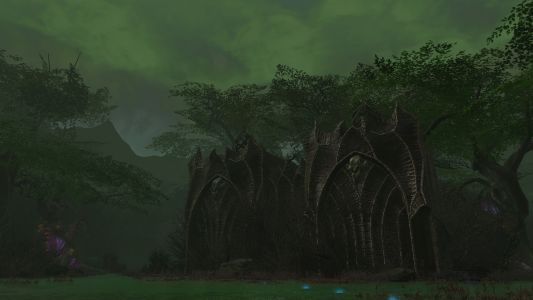 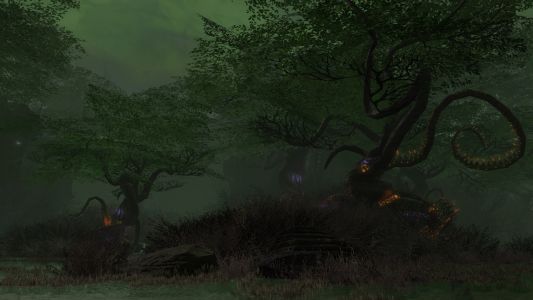 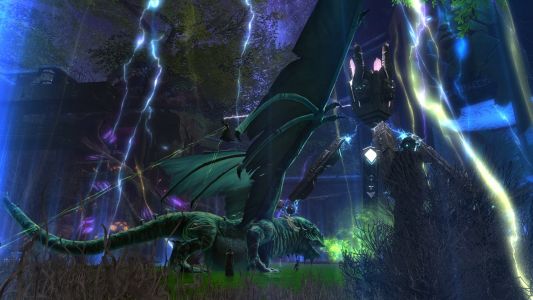 The Dwarf rises, a little stiffly, and looks up at the night sky. Battle wounds never fully heal, and they ache a little in the cool night air. She knows that you’re up against incredible odds, and it’s late; your own wounds will come soon enough. She motions toward you with her cracked drinking horn.

You’ll want to rest overnight, no doubt? Certainly; build your strength, you’ll need it.
Perhaps you’d like to hear a little more of the history of these twisted Elven-kind, the Tuath’de? Good. Pour mead and draw closer to the fire…
Long ago, the ancestors of Telaran elves were separated from their kin and evolved along a different line in the Plane of Life. They remained more primal, and more corrupt in their desire for power in their domain of Life. Without the influence of other sentient races, such as the Telaran Kelari and High Elves had, they became increasingly insular and xenophobic. Anything not of them was an enemy to be conquered or destroyed.
Over time, the Tuath’de became witches, in the true, deep, wild sense of those steeped in Life forces so redolent of terror and twisted in power that they ensure not life, but death, for all who opposed them. All in the Plane of Life lived in fear, far out of keeping with the beauty surrounding them.

The Tuath’de ruled the Plane of Life uncontested, until the dragon Greenscale appeared. A gigantic, ungainly, toad-like beast, at first engendering mockery and taunts among the Elven-kind. Soon, however, his immense power and unsatiable appetite struck fear into all hearts. As he began his conquest of the Plane, he found the most unlikely of allies amongst all those whom the Tuath’de had so cruelly oppressed. Once they saw that he was not only immensely powerful, but also resistant to the previously unassailable magics of the Tuath’de, tribes and beasts flooded in to support the great green beast.
The battles that followed were brutal and vicious, but inexorably, Greenscale and his army pushed the Tuath’de back. The fateful day that Greenscale devoured King Dach brought an end to their reign. The Planar inhabitants settled down to a somewhat nervous, but happier life under the giant frog-lizard-dragon, who was largely content to leave them be, aside from his unfortunate habit of snacking on the occasional supplicant. They came to consider it a final tax of sorts, and accepted it in the general way of death and taxes coming hand in hand.
Opposition did not end there, however – it merely went undergound, with the Tuath’de. They were crushed but far from defeated. Loudest among the disposssed was Dach’s youngest daughter, Una. She was considered quite mad. Just mad enough, perhaps to seize the throne through the sacrifice of her siblings. Her grasp of witchcraft was unmatched, and she harnessed it to sink the skull of the great beast Xarth into the mire that bore his name. There, she created a refuge for her people, where they plotted and rebuilt their power, dreaming of the day they would emerge and retake the Plane.

For much of Telara’s history, the Tuath’de have thus lived in secret, within the mist-shrouded swamps and deep forests of the Plane of Life. The Court of Queen Una held sway over great swaths of the Scatherran Forest and the nearby swamps, and were curiously unmolested. Even the powerful lackeys of Greenscale could not penetrate the cunning, glamor and fear of the collected and growing power of the Court. And so they remained for some time, present but hidden, save for sudden forays to terrorize other beings and seize materials.
It is rumored that the mad Queen dreamt of the Ritual of Asklepian, an unspeakable work that would reanimate the great Green Mother, but under her will. With this Simulacrum, she could encircle an entirely new world with a forever tree, under Una’s sharp-clawed control. Such an act requires relics of ancient, sacred power, perhaps found only in the concentrated glens of the forest of Wyredode.
When the Comet of Ankhet tore through their plane, several things happened at once. Una’s favorite consort, Prince Fionn, was leading a raiding party in the western marches, against Blackthorn refugees. It is widely assumed that he was killed in the massive impact, but woe be to any fae who so much as whispers it in passing.
The Tuath’de suddenly found themselves ripped from their ancestral homelands, trapped on a celestial object with denizens of the Fire Plane, their sworn enemies. One imagines the screams of rage and frustration as they came to fully grasp their situation. Cut off from the other forests of Aevintyr, her conquest thwarted and her love taken from her, Una’s madness threw off its last ties to rationality. Her only comfort is embodied within her sole child and heir, Tristane, and the certainty that all of her sacrifices will soon come to fruition as she realized she had a nearby source of even greater power than the relics of Wyrderode… Ankhet.
The Tuath’de have only ever feared the dragon Greenscale. WIthout his ceaseless hunger to constrain them, they felt strangely liberated. The Tuath’de certainly had no need to hide on the Comet, and were easily the equals to their hated rivals from the Plane of Fire, with whom they shared this strange new land. They worked ceaselessly to increase their skill and magic, bleeding innumerable new thralls on their madstones, creating ever more powerful foci with which to grow their witchcraft.

Most Tuath’de, if you looked beneath the brittle, arrogant surface, were secretly intimidated by Ankhet, in awe of the inherent power of the Tenebrean force that had both freed and continued to held them. Una alone was undaunted by the being, and, whether driven by her madness or fate, soon resolved to seize the Tenebrean as a brilliant tool to achieve her own ends. Hurtling through space and desperate to seize this new opportunity for freedom and their own dominion, the Tuath’de began to focus upon their Queen’s goal with a fanatical and manic devotion. Together, they seek to bend the will of Ankhet herself and bring about the return of the Green Mother.
The Queen, Una, restless and malevolent in power and intent, stalks about her domain, preparing the rituals to bind Ankhet. Everything must be perfect. Everything must be laid forth with care and executed in unmatched order, for the forces of great magic to be brought to bear. Una heard the news of Ascended arriving on the comet with both anger and contempt; she rages at the thought of lesser beings and the ruin they could bring to her plans.
“Leave not one standing. Butcher them with tooth and claw, with rending power and reeking desolation,” she ordered, and her followers rushed forth to obey. One tends to grow a little mad and fanatical when inspired by such a leader. Her very insanity had a way of seeping into the surrounding environs.

All of the Tuath’de forces have been summoned, and the beasts of the marsh itself are alert and rage-filled in response to her disturbed state. All are focused on protecting the Coven until the ritual is completed and Ankhet is hers. After that, Una mused in anticipated triumph, nothing else would matter and all would be laid forth beneath her sole command. Once she had the Simulacrum. Yes, the Great Green Mother, glorious in her growth, so close at hand now, ready to wreak revenge and tear life from the very corpses of the enemy. And everyone not a full-blooded Tuath’de was her enemy.
“Soon Fionn,” she breathed, “Soon, my love. Our domain is imminent. Our son’s birthright is assured.” She laughed and nodded coquettishly, as if sharing a private joke, but she was alone in the room, save for the corpses of a few foolhardy Ascended.
An ever-increasing number of flies provided a song of joy to complement her reverie.