Droughtlands is the first semi-arid region in Telara. The zone’s mostly concurrent with Moonshade Highlands. Players can easily level up through one zone without really seeing the other. Since Rift 3.4, the Droughlands holds the entryway into the Planetouched Wilds in Rahn’s Reach. 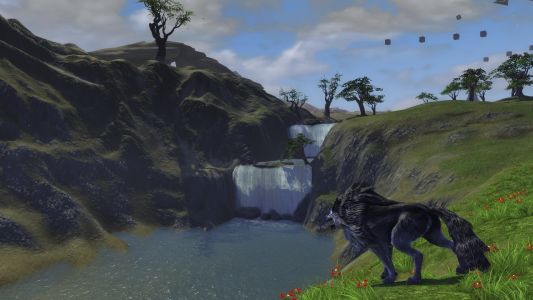 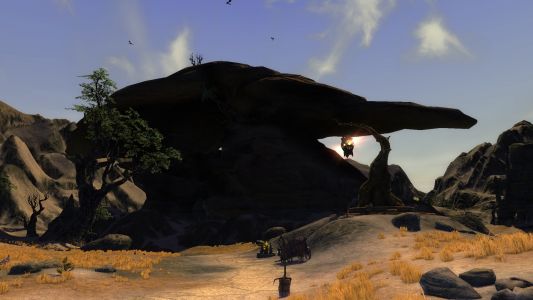 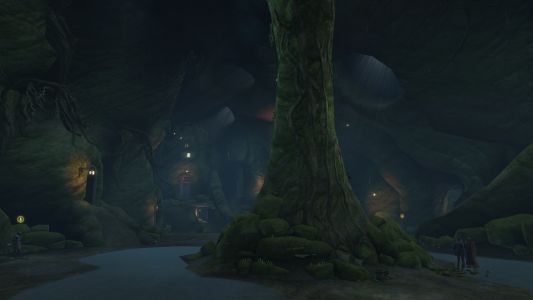 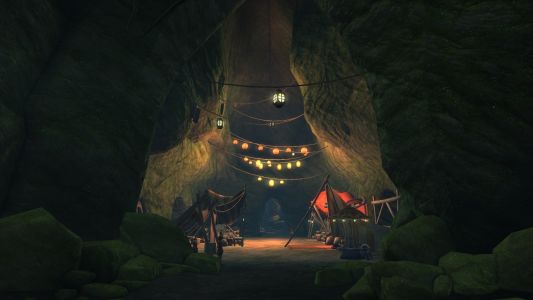 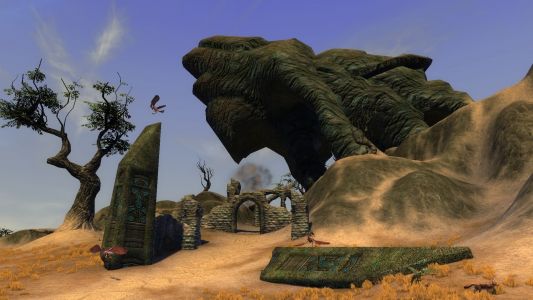 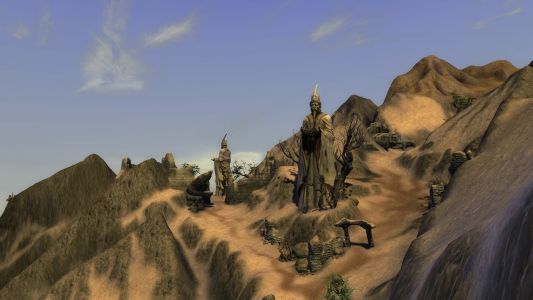 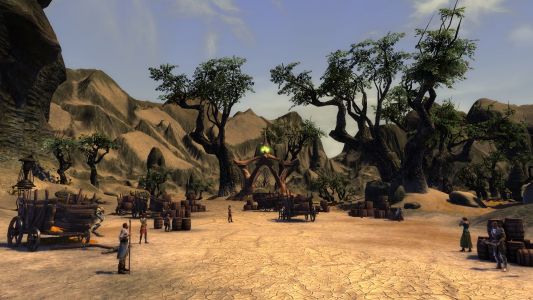 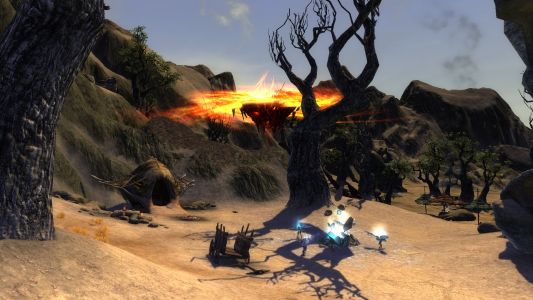 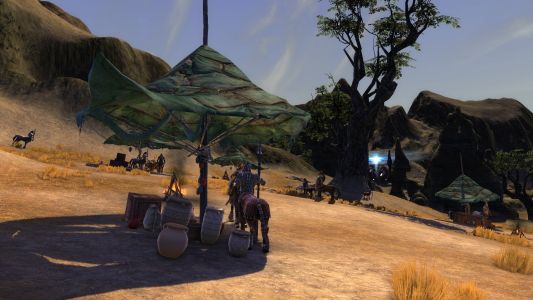 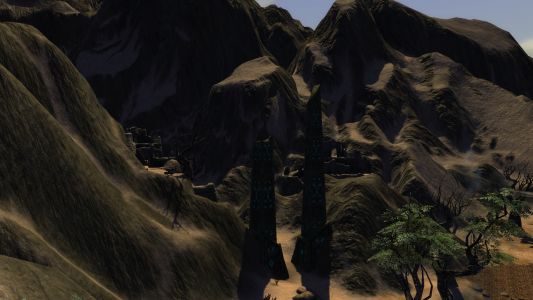 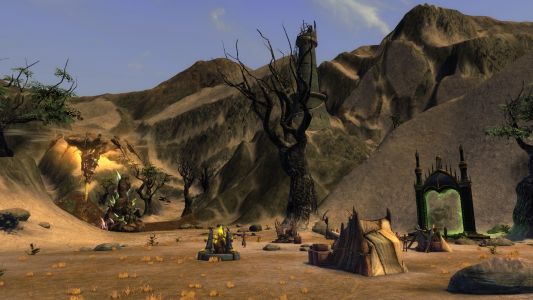 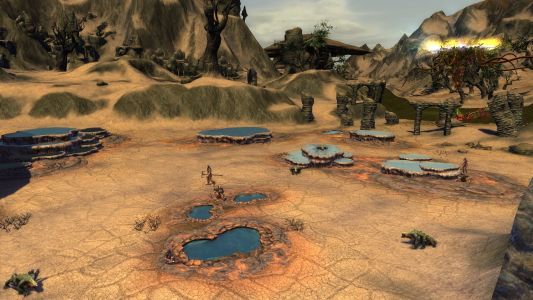 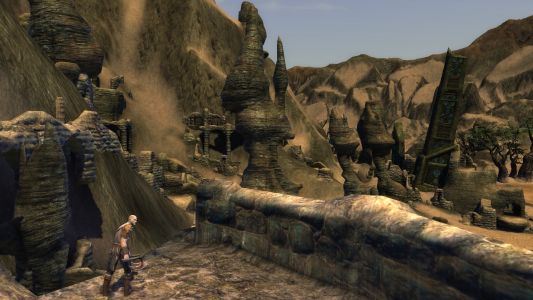 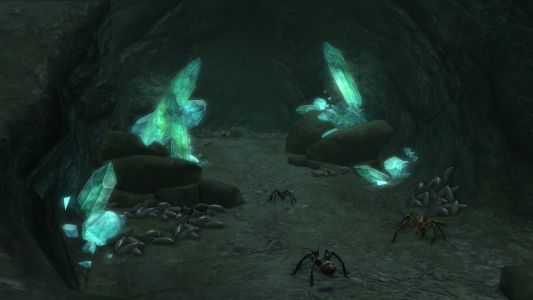 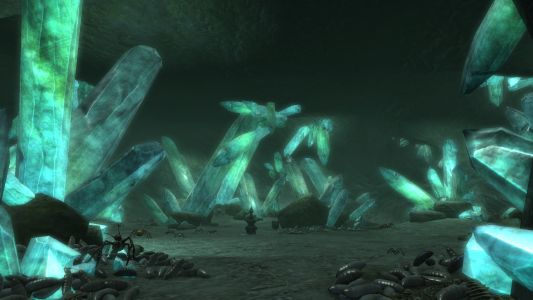 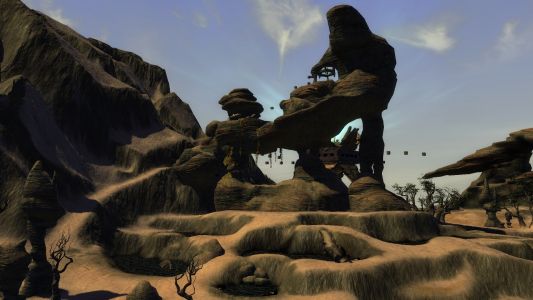 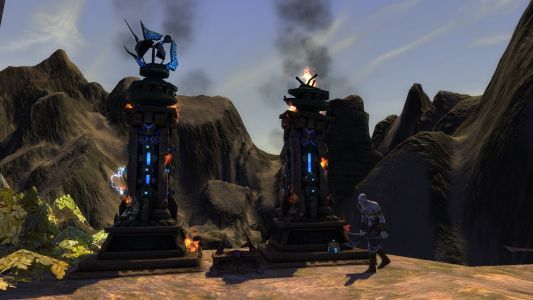 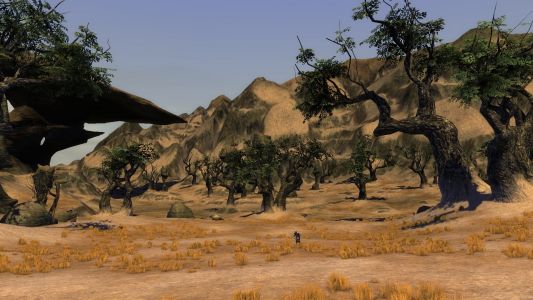 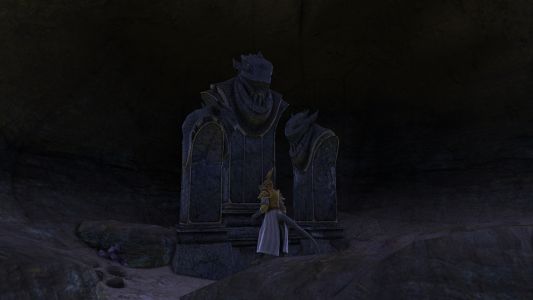 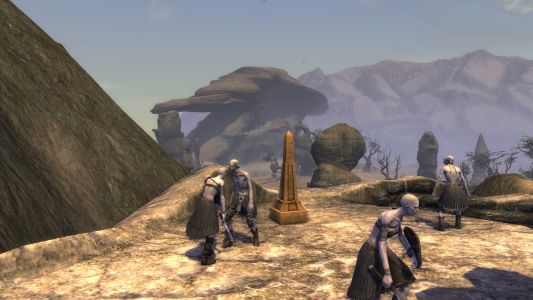 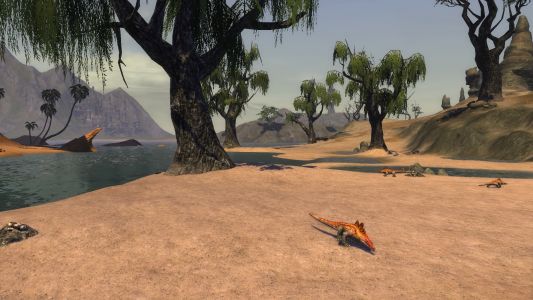 Even those unschooled in Telara’s history would see at once that the Droughtlands were not always barren. Leaving Freemarch for this desert, travelers see the ruins of proud towers and mighty walls dotting the landscape like the shattered bones of a fallen giant. Worn smooth by sandstorms and centuries, these tumbledown stones number among the final remnants of the Eth Empire.
Once the heart of civilization and progress, the lost cities of the Eth draw hungry eyes across Telara. Ascended, dragon cultists, rift spawn, and unaffiliated explorers all seek to harvest the riches and knowledge that may lie hidden beneath the shifting sands.

A vast rock formation stands in the heart of the Droughtlands, called Lantern Hook for its resemblance to… well, a giant lantern’s hook. Within lies a city of the same name, where merchants hock their wares in well-lit caves. Paths wind in and out of the stones, leading sometimes to beautiful vistas, and sometimes to a seedy and dangerous underbelly.
For Lantern Hook has its share of dangers, as criminals host illegal gambling dens in out-of-the-way stone chambers, and squeeze the merchants for protection money. The Lantern Hook Irregulars toil to clean up the passages, but it’s easy to hide dirty deals and worse in the sprawling caves under the Hook. Former brigands themselves, the Irregulars have plenty of experience dealing with criminals, but they may need help from the immortal Ascended to end the crime wave.

From Lantern Hook, adventurers can strike out for any of the perilous regions of the Droughtlands, where they will encounter the desert’s various factions, only a few of whom will greet the Ascended with anything but hungry maws. The most reasonable by far are the Arcane Hand, a neutral order of scholars devoted to reviving Eth culture and learning without the irresponsible use of technology.
Another group willing to tolerate outsiders is, surprisingly, the Trumasi cyclops tribe. These brutes have lived in the Droughtlands since the Age of Dragons, casting off their service to Laethys. If an Ascended can prove as strong and savage as a cyclops, the Trumasi might even pledge their aid against enemy rift-spawn who’ve come to ravage the desert.
Such mighty allies are a necessity in a scorching wasteland where centaur bands devour sentient meat, and kobolds chase trappers from their hunting grounds. Harpies soar between the desiccated towers of the Eth, unwittingly guarding ancient wonders and perhaps even the secret of why these glorious cities fell.

Worst of all, the Stormbrood of Maelforge has invaded the Droughtlands, a Dragonian warband who seek only to further the aims of their rapacious god. Dragonians are the Flame Sire’s favored strategists and their presence can only mean that Maelforge will not be satisfied until the desert is a sea of jagged glass.
“Ahh, now this place brings me joy,” said Sothul, leader of the Stormbrood, to his lieutenant.
“Look at it, Morkael! The sun scalding your scales, and searing sand between your claws. Wild herds of centaur roam the dunes, hunting and feasting on helpless travelers. See the harpies soar between the ruins of ancient folly! Ruins! What better gift for the Flame Sire than the hollow bones of civilization? I hear the yapping of kobolds by night, and there are even cyclopes to fight in the hills when these Ascended grow tedious. Heat and ruins and endless monsters!”
“This, Morkael, is the paradise Maelforge will make for us across all Telara!”